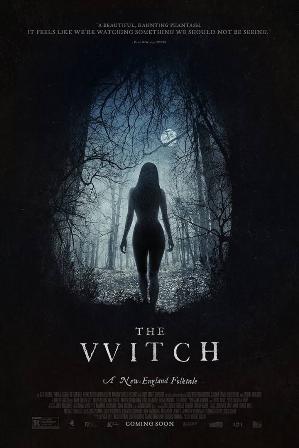 I really wish I could say I liked The Witch, but I’d be lying if I did. This new horror film has been getting a lot of praise from critics, but what really spurred me to see it was the endorsement from Stephen King. Granted, King is an author and his tastes in movies belong to him and shouldn’t matter all that much to me, but when someone like him says something’s scary it’s hard not to believe it. While The Witch does set a suitably dreary, tension-filled atmosphere, the story is incoherent and the scares are virtually non-existent.

The set up for the film was somewhat interesting. A young family is cast out of a small New England village because they just don’t jive with the rest of the townsfolk. Being that it’s the early 17th century and the New World is really pretty new, the family left to fend for themselves in the nearby woods. The reasons they are cast out are not quite clear, but it seems to have something to do with the behavior of William (Ralph Ineson) and his wife Katherine (Kate Dickie). The couple are religious fanatics who put the word of God above all else including the well-being of their five children.

I was really curious to know more about this family’s relationship with the town and was hoping for more interactions with the other people, but instead the rest of the film takes place on the family farm. William and Kate attempt to eek out a living growing corn and raising goats. Their freer-thinking oldest child Thomasin (Anya Taylor-Joy) struggles to cope as she seems to fails to please her strict parents at every step.

Thomasin is on the verge of womanhood, which seems to make her mother angry and her father uncomfortable. The parents even discuss sending her away because she is of no use to them anymore. Unfortunately The Witch falls apart just where it could have gotten interesting. What I found most uncomfortable was the relationship between the misunderstood Thomasin and her overbearing parents. As strange things begin to happen, Thomasin is accused of being a witch by two of her younger siblings.

Had we as an audience not known that there were really witches, for some unknown reason, out in the woods behind the family farm, thing might have actually gotten scary. The real witches weren’t all that scary because we barely see them. The scariness lies in William and Kate’s ignorance of their own surroundings and their unwillingness to accept their daughter for who she is. How far away from reality do they allow their religious beliefs to take them.

Instead of exploring any of those ideas the film totally cops out to cheap thrills and an utterly ridiculous climax. It’s a shame because the performances by all of the actors are quite good, but they are wasted here. I can hardly recommend this film for any reason.

The Witch Images: A24 Films

If you love seeing movies in the theater on a big screen, consider MoviePass – the subscription service that allows members to see one movie IN THEATERS every day for one monthly fee.

Sherry is a writer/blogger specializing in entertainment and food writing. You can find her gluten and grain-free food articles at scdforlife.com.
February 22, 2016February 29, 2016 Sherry Lipp