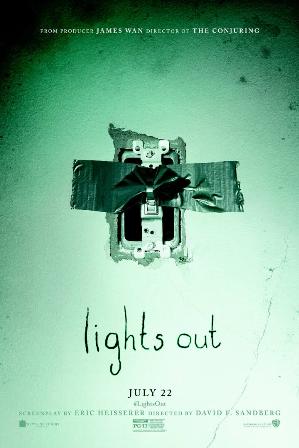 Lights Out offers a fun new spin on the typical things-go-bump-in-the-night horror film. Most of us remember being afraid of the dark as children and being reassured by our parents that there are no monsters lurking in our closets or under our beds. But what if our parents told us that not only are the monsters are real, but are actually their friends? Lights Out throws out the entire concept that there are any safe places, which is where most of its thrills lie. It offers plenty of jumps with some thrilling scenes that will keep you on the edge of your seat. It could have pushed things even further, and it’s no masterpiece, but it’s a pretty fun summer watch.

Young Martin (Gabriel Bateman) is sent home from school because he can’t seem to stay awake in class. It’s clear he’s not getting enough sleep at home and a concerned faculty has contacted child protective services. You would think that the fact that Martin’s mom Sophie (Maria Bello) is nowhere to be found in Martin’s time of need would have raised more red flags, but instead he is sent home with his absentee older sister Rebecca (Teresa Palmer). This is actually a big weakness in the film. Their unbelievable actions serve the script but don’t really reflect reality.

Rebecca hasn’t lived at home in years. She is afraid to make a commitment to her overly adoring boyfriend Bret (Alexander DiPersia) and she has little interest in her brother until he mentions he is being haunted by an apparition named Diana. It turns out Rebecca had had her own run-ins with Diana as a child and is about to meet her again.

Martin is afraid to tell his mom about Diana because he is afraid she won’t believe him. It turns out he needn’t have worried because not only does him mom already know about Diana, but she claims to be Diana’s best, and only, friend. Sophie thinks they can all live as a happy family as long as they play by Diana’s rules. The caveat is that Diana can’t stand light and is a total misanthrope. She only likes Sophie and doesn’t want to share her with anyone, particularly needy children.

Light’s Out ramps up once the kids decide to rid Diana from their lives. Since Diana can only be seen, and attack, in the shadows of darkness things get pretty scary when they can’t seem to keep the lights on no matter what they do. One of the best scenes involves Bret trying to stay in the light by any means necessary including his cell phone. There are a few things that don’t make all that much sense in this film, but it’s not too hard to just go with it and enjoy it for the simple thrills it’s trying to bring.

Sherry is a writer/blogger specializing in entertainment and food writing. You can find her gluten and grain-free food articles at scdforlife.com.
July 27, 2016July 27, 2016 Sherry Lipp